If you have gotten massage at Anthrocon in the past several years, you've likely met Amy Thacker. She and her friend Johnny have been coming to AC to set up for massage therapy for a while now, and she's an amazing massage therapist and good friend of mine. Some of you have experienced her skilled and magical hands, been helped and healed by her knowledge of the body. I wanted to let you know about her upcoming office space in Virginia, and share this in case you can help out!
https://www.gofundme.com/48yya3ms

The poll is to FC, but if there is enough interest there will be train added for other cons.

Going to AnthroCon this year and want a new badge? Or a new way to showcase your fursona?
We may have something just right for you! Please visit our website for prices and more information.

Thanks for Looking! :D 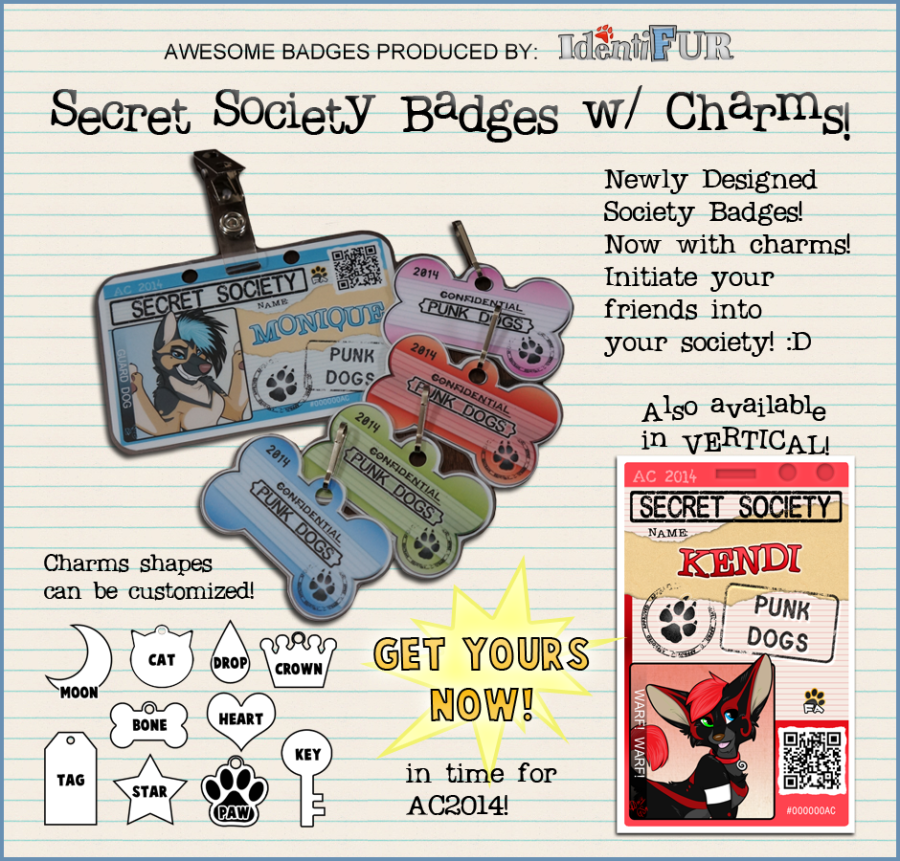 Secret Society Badges with a twist to their design! Mini charms that you can clip to your main badge. You can use these charms ( with your societies name on them ) to tag and add your friends to your secret society by clipping it to their lanyards ( or wherever they fit nicely ). Highly customizable shapes, these initiation charms can be ordered in 4,6,8, or 10 with your badges. Since these are all hand made, it's the highest number we can offer.

To order in time for the Convention, visit this website link: http://identifur.weebly.com/secret-society-badges-w-charms.html

ANTHROCON 2014 is currently seeking submissions of artwork, stories, photography, poetry, and articles for its conbook!

The Anthrocon conbook offers a fantastic forum for artists and writers to showcase their talents to their peers. To make contributing to the conbook easier, a file-uploading site is available. Anthrocon asks for non-exclusive print rights for submitted works. The artist or author may publish the submitted work in any other fashion; previously, at the same time, and after.

While we welcome any submissions of most any nature, please be aware that priority may be given to those works that complements the theme of the convention, "SECRET SOCIETIES." All submissions should be in the 'G' to 'PG-13' rating.

We look forward to hearing from you! 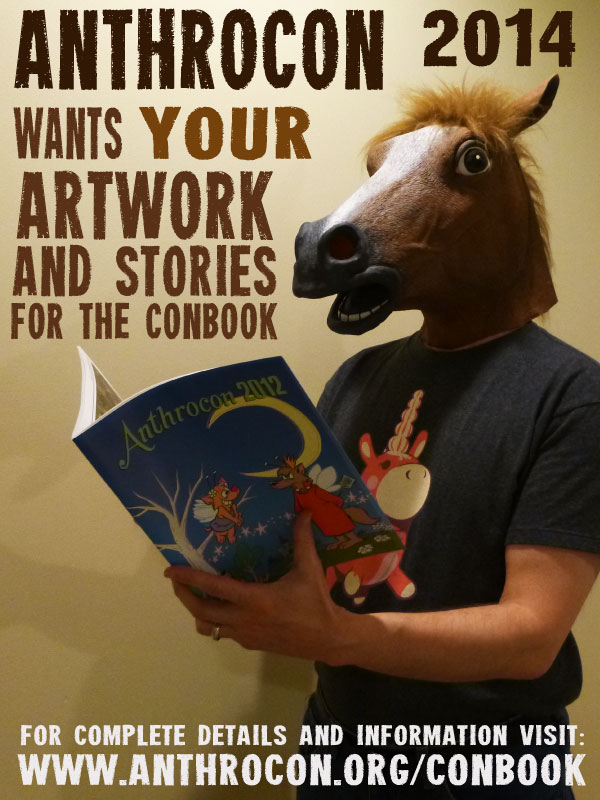 firewolf66 a happy firey wolf day and I do hope you enjoy your wolf day until you howl yourself into another year older.

If you ever wanted to appear in a comic book, this is your chance!

I'm raising funds to print Volume Two of Last Res0rt, and I'm offering cameos -- they come with badges to make sure I'm drawing your character right, so it's like a huge multi-part commission of your character(s)!

You can pre-order the books too, but this offer for cameos is only running during the kickstarter -- so check it out today!

Credit me (Abrahm) if you repost or reuse any of the images.

After doing nothing but working on videos and photos for a week after returning from AC, I've completed my entire video library from the convention :) As it is every year, AC is just a blast in every way and I always look forward to being able to share the magic of this convention with you guys.

Click on the titles to go directly to the video page, and descriptions are below.

FURSUITING FUN AT AC 2013
This one is my favorite to do each year (but also the most work), my annual compilation of the best fursuiting moments I was able to capture at the convention to a great beat - Krewella's Alive (Jakob Liedholm remix).

FURSUITING FUN AT AC with Kijani & Singha Lion
Thanks to the awesome ChaosReign who tagged along with me to AC this year, I was able to get a lot of great footage of a certain Hawaiian Lion fursuiting around the con. From impromptu games of "keep away" with my plush zebra leg to entertaining local Pittsburgh kids on the street, there's nothing like fursuiting at AC! Most of the footage also features my friend Rygar as the ultra cool Singha Lion.

FURSUITING AT TONIC
I always head to Tonic Bar & Grill on Saturday night in fursuit during AC weekend, and this year's outing went quite differently then in past years. After being pulled outside for a photo, a group of non-furs drinking on the patio invited me to sit with them, and not being one to "break the magic" and speak with my human voice, a hilarious guessing game ensued :)

SAYING GOODBYE AT AC 2013
Like last year, I decided to fursuit in the lobby of the Westin on Monday morning, to say goodbye to the masses of furry fans departing back home and give them one final happy memory. Warning: have tissues handy while watching this video *teardrop*

FOX AMOORE PLAYS LION KING MUSIC
The ultra-talented Fox Amoore from Scotland giving an impromptu concert on the grand piano in the Westin Hotel. He was mostly taking requests, and I nearly teared up when he played a couple of Lion King songs - Can You Feel the Love Tonight and I Just Can't Wait to be King. The Lion King was what got me into the furry fandom in the first place, so for him to play beautiful renditions of those songs was one of the superb highlights of my weekend :)

This is a truly amazing story that has gotten the Furry Fandom an extraordinary amount of good press, and it couldn't have happened to a nicer and kind-hearted individual that welcomed, with open arms, an often-maligned group of people to the city many years ago.

PITTSBURGH THREE RIVERS REGATTA FIREWORKS SHOW
In case you missed it, here's the fantastic fireworks display that kicked off the convention on July 4, as viewed from the balcony of the David L. Lawrence convention center. It was an incredibly long show (over 24 minutes), and the finale was one of the best I've ever seen.

CLOSING CEREMONIES HIGHLIGHTS
Closing ceremonies at AC is always a bittersweet time as we celebrate the weekend's incredible successes, but are saddened by the end.

This video features highlights including total numbers for fursuits, registration, Guest of Honor reflections on the weekend, and last but not least the amazing amount of money the furries raised for the 2013 charity, Equine Angels Rescue.

UNCLE KAGE'S FURRY IN THE MEDIA/POSITIVELY PRESENTING FURRY PANEL
The esteemed and experienced chairman of Anthrocon, Uncle Kage, imparted his wisdom on Friday morning in the realm of dealing with furry in the media, as well as how to positively promote the furry fandom to the public. Enjoy and hope you learn something, along with a few laughs along the way. Kage is a great storyteller and no matter how many times you've heard his anecdotes, it's just as funny as the first time :)

USING YOUR PASSIONS FOR A CAUSE PANEL
Furries are passionate people, whether it's costuming, art, writing or even gaming... so why not use that passion to help others? This great panel featuring Wolfpup TK (Furs 4 Life), Yippee Coyote (Critters by the Bay), and Ty Fusky discusses the many ways that furry fans can get involved in charity work and improving the communities and world in which they live.

THE MUPPAPHONE (WITCH DOCTOR)
A colorful cast of fursuiters teamed up to perform a reincarnation of a classic Muppets skit. It was a neat idea and quite entertaining :)

SARDYUON'S PHYSICS
At the AC Masquerade this year the always impressive Sardyuon tried a different kid of act, simply called "Physics." It may have been an excuse to TP the stage, but not without entertainment value!

DRIVING FISH CRAZY
Masquerade regulars Provo Cheesebeagle (Cheesio), Tigris, Royce and Sharky came up with a clever skit to fit the "Fast and Furrious" theme, during which a drive test goes horribly awry.

Always fun to see what this team comes up with year after year!

RHUBARB THE BEAR
One of the most talented musicians the furry fandom has to offer, Rhubarb delighted the crowds at AC's annual Masquerade. His stage time was cleverly scripted as he had to pass an impromptu "rehearsal" to open up the show, and was brought back later.

THE LUCIFURS
After last year's fantastic performance, the Lucifurs are back in a big way with an impressively choreographed and high-energy dance routine. As always a real treat to watch this group tear up the stage with their swag!

And if you attended the Masquerade this year, I was the creator of the "Magic of Fursuiting II" video that was featured. I want to thank

kuddlepup for putting it in and showing to a wide audience the amazing magic that can happen when ordinary people put on animal costumes to entertain others, and bring smiles and joy to their hearts :)


FURSUIT DANCE COMPETITION
The Fursuit Dance Finals at AC is the best of the best in the fandom at their craft, and the finals this year was absolutely packed with talent. This event is absolutely one of my favorite parts of AC weekend!

FURSUIT DANCE COMPETITION FINALS HIGHLIGHT REEL
Each of the 20 fursuit dancers in the finals of the prestigious AC 2012 Fursuit Dance Competition rocked the stage, and I pay homage to their talent with this unique highlight reel compilation video that features each of their awesome dances.

Since a number of folks had trouble viewing them in my FB album I made them available on Live Journal.